Alexander Aloysius Sullivan was born on March 24, 1880 in Chicago, Illinois. He was the seventh of ten children born to Philip J. Sullivan (1840-1915) and Ellen Connor (1848-1919). Ellen "Nell" Theresa Madigan was also born in Chicago, the second of seven children born to Patrick Madigan (c1850-1890) and Bridget "Bessie" Thompson (1855-1935). They married at St. Agatha's Catholic Church on August 20, 1907. They raised two children, Thomas Aloysius born July 7, 1908 (See also Sullivan/Carmody Blog) and Helen Mae born March 11, 1914 (See also McIntyre/Sullivan Blog), on the west side of Chicago. Alex, or "Al" as Nell called him, was a steamfitter his whole life. Al worked for Mehring and Hanson located at Jefferson and Randolph in Chicago. Mehring and Hanson eventually became Hill Mechanical which is still in business in Chicago today. Nell raised the two children and was a homemaker her entire life. Al was almost six feet tall, which for his time was quite tall. Nell, on the other hand, was only about five-feet-two inches and in her older years much shorter than that! Al and Nell both died at their home located at 18 North Latrobe in Chicago, Al on January 26, 1956 and Nell, ten years later, on January 21, 1966.


Ellen “Nell” Madigan Sullivan was born in Chicago, Illinois 140 years ago today on May 29, 1880. The second oldest of seven children of Irish immigrants, Patrick Madigan (c1850-1890) and Bridget “Bessie” Thompson/Thomas (1852-1935) both from County Limerick, she grew up on the west side of Chicago. When she lost her Dad of pneumonia at only 10 years of age, her Mom was pregnant with her sixth sibling. It must have been a most difficult time for the family.  She would eventually meet the love of her life, John J. Burke

but sadly before they married, he also died of pneumonia. Life went on and she then met her future husband, Alexander Aloysius Sullivan (1880-1956)

Around 1918, Al and Nell bought a two flat home further west in Chicago at 18 N. Latrobe Avenue where they lived the rest of their lives.

Her daughter and family moved into the first floor flat in 1949 and lived there until 1967 with Al dying in 1956 and Nell passing away in 1966. Nell Madigan Sullivan lived a happy life in adulthood involved in her church at St. Thomas Aquinas, her bridge club and watching after her family. I had the pleasure of living with my grandparents for most of my childhood, moving into my grandmother’s apartment when her husband died. Rest in Peace, Nellie, your are still much loved.

Sources: Information collected by Elaine McIntyre Beaudoin in her genealogy research. www.McIntyreGenealogy.com. Photos: In the collection of Elaine M. Beaudoin.

Posted by Elaine McIntyre Beaudoin at 3:59 PM No comments:

A Four Year Old on Her Own

In her "Story of a Lifetime" book, Mom wrote about one of her experiences:

Question: Did anything unusual or strange happen to you during your childhood?


Answer: "This probably was unusual or strange! I was about 4 years old and living on Fillmore St. I was playing in the back yard, suddenly got bored and decided I wanted to go to the movies. My Mother and Father would take me to the Twentieth Century or Gold Theaters on Roosevelt Rd. which was 2 blocks south of us. So I went out the back gate, cut through the neighbors' yards and got to Roosevelt Rd. I saw the Gold about a block away. I went there and followed some people in the show and went in and sat down. My Mother looked all over for me and when my Father came home from work she sent him to look for me. After asking everyone if they saw a little girl with long blonde curls, he asked the Ticket Taker at the Gold. She said "Oh, about 3 hours ago I did, she went in the show." My Father got the usher to go down all the aisles with a flash light and there I was in the front row. I didn't want to leave but he got me out."

I can't imagine what someone would think today if their 4 year old daughter disappeared from the backyard.

Helen did love the movies her whole life. I remember her taking me to the movies in downtown Chicago when I was 4 or 5. We would arrive in the morning and spend all day at the theater.
Posted by Elaine McIntyre Beaudoin at 8:55 PM No comments:

Al and Nell's second child, Helen May Sullivan, was born on March 11, 1914 -- 100 years ago today. The video is called "Happy 100th Birthday Seedy" because that is the name her three granddaughters called her. However, her great grandchildren called her Gigi.

Posted by Elaine McIntyre Beaudoin at 9:46 PM No comments:

Email ThisBlogThis!Share to TwitterShare to FacebookShare to Pinterest
Labels: Sullivan

Al and Nell Sullivan in 1940 US Census

Alex and "Helen" Nell Sullivan are listed as living at 18 N. Latrobe, Chicago, in the 1940 US Census.  This is not a surprise to anyone in the family.  However, the other information provided on the 1940 census gives us a unique glimpse into their lives at the time.

Al and Nell owned their home which was valued at $3,500.  Their tenants, Robert and Agnes Hutchison, lived on the first floor and paid $45 per month rent.  I remember my Mother telling me that Robert Hutchinson was also unemployed at some point during the depression, but in the 1940 census it states he was working as a teacher in the public school system.  When the Hutchisons moved from 18 N. Latrobe in the late 1940s, the McIntyre family moved in and stayed until 1967.

The census reports Al completed four years of high school.  He attended St. Ignatius High School (St. Ignatius College Prep today), which was called St. Ignatius College at the time.  In 1894, St. Ignatius College enrolled 400 students, most were first generation Irish, as was Alex.  This is the same school his grandson, Laurence McIntyre, attended nearly sixty years later.  To my amazement, Nell only had an eighth grade education.  She sure was smart for only having attended elementary school.  For those of us who knew her, I don't think one of us would have guessed she hadn't had more education.

Although Nell and Al were only 2 months apart in age, when they reported their age to the census taker, somehow Al suddenly became five years older!  In April of 1940, Al would have just turned 60 the week before and Nell would have been two month shy of 60 but she reported her age as 55!  Ah, the female privilege!

To enlarge the 1940 US Census, double click on image.

Ellen "Nell" Madigan would have been 131 on May 29, 2011. Since her birthday often fell over Memorial Day, the family always celebrated her special day on that weekend. Here are some photos from her life.


She was a wonderful lady who was a super cook (oh those roast beefs), a fun grandmother and a devout Catholic, attending Mass everyday.  Happy Birthday!
Posted by Elaine McIntyre Beaudoin at 3:28 PM No comments: 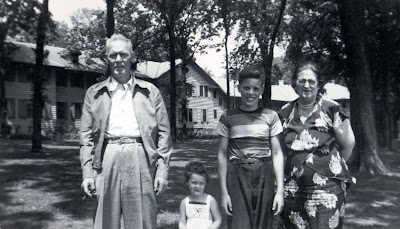 Al and Nell Sullivan with two of their grandchildren, Elaine and Larry McIntyre, at Lake Lawn Lodge, Delevan, Wisconsin c1949.  They are standing in front of the old hotel which has been torn down.  Good times were had at LLL.
Posted by Elaine McIntyre Beaudoin at 9:45 PM No comments:

Alexander A. Sullivan died on January 26, 1956. He had arteriosclerosis for several years before his death. I remember his legs would fill with water and look very swollen. I was told this was because his heart was not beating properly and therefore not removing extra fluid from his body. Dr. Fitzgerald signed the death certificate. He was the family doctor.

When Al died, he had been retired for several years. For almost all of his working life he had been a steamfitter.  A steamfitter is one who installs and repairs heating, ventilating, refrigeration, and air-conditioning systems.  As early as 1908, on his son's birth certificate, his occupation is listed as steamfitter.

Al was waked for two days at the Hursen Funeral Home located at 5911 West Madison Street, about seven blocks away from his home on Latrobe Avenue.  It was the funeral home the family normally used.  He was buried at Queen of Heaven Cemetery on January 30, 1956 after a funeral mass at St. Thomas Aquinas church, his parish for nearly 50 years. His son, Thomas Sullivan, was the informant on Al's death certificate.

If you double click on the image, it will increase in size.

Posted by Elaine McIntyre Beaudoin at 9:41 PM No comments:

Is This Blog Still Active?

As new information is located and lends itself to posting on the blog, it will be shared here. So, even though there may not be recent posts, the blog is still active. If you have a question, email me at elaine.beaudoin@gmail.com

TO ENLARGE AN IMAGE, DOUBLE CLICK ON IT AND IT WILL OPEN LARGER IN A SEPARATE WINDOW.
YOU MAY NEED TO CLICK ON IT AGAIN TO FULLY INCREASE ITS SIZE.

Elaine McIntyre Beaudoin
Elaine has been working on her family history for more than 25 years and is particularly interested in Irish and Chicago genealogy. She is retired from DePaul University and holds a master's degree in Library Science and an MBA. Elaine became interested in using blogs as a way to communicate with her family, grammar school friends and university colleagues in 2010, establishing, over time, 15 different blogs. She has served as the Road Trip Chair and Archivist for the Computer Assisted Genealogy Group - Northern Illinois (CAGGNI) and is the immediate past Chair of the DePaul Emeritus Society. Elaine is a member of the National Genealogical Society (NGS), New England Historic Genealogical Society (NEHGS), Chicago Genealogy Society (CGS), Computer-Assisted Genealogy Group - Northern Illinois (CAGGNI), and the Irish Genealogical Society International (IGSH).